Icefi: public debt in private hands in Guatemala and El Salvador is more costly in financial and social terms

The Central American Institute for Fiscal Studies (ICEFI) published the study “An evaluation of the effect of public indebtedness in private hands, a practical application for Guatemala and El Salvador”[1], as an innovative contribution on an area of fiscal policy characterized by opacity and scarcity of data.

As a first finding, ICEFI highlights that public debt in private hands, the governments financial commitments with private sector creditors, mainly banks, can be extremely opaque. This is because the Salvadorian authorities have refused to provide detailed data about its public debt in private hands, violating its own law on access to public information, and the international standards and principles of fiscal transparency. In contrast, the authorities of the Guatemalan Ministry of Public Finance (Minfin) did provide the disaggregated data that ICEFI requested.

The study details the public expenditure budget items of Guatemala financed with public debt placed with private creditors, with the aim of identify its economic and social impacts. The information reveals that the main destination of public debt in private hands is the payment of capital, interest, and other costs of the public debt, increasing the risk of the so-called "snowball effect". Following in importance are the public investment in infrastructure and the attention of climatic events emergencies. When analyzing the structure of the main functions of the public expenditure by finance source, the data show that, although public debt is not the main financing source of social spending, Treasury bonds, placed mainly in national and foreign private banks, constitute most of the public debt financing social spending, not external loans contracted with the IFIs. This decision lacks any philosophical basis, and is motivated by the practical advantages of Treasury bonds, such as discretion and speed of disbursement. One consequence of this practice is that authorities neglect the high and long-term financial costs of this preference for bonds placed in private banks.

To illustrate the high social cost of the preference for public debt in private hands, ICEFI calculated its marginal effect on public spending. For this calculation, ICEFI notes that higher interest rates make it more costly than the public debt contracted with other creditors. Based on this fact, considered the hypothetical case in which during the period 2011-2021 Guatemala had contracted external loans only with IFIs, and calculate the resulting savings in public spending that would have been obtained by paying interests at lower rates. This analytical exercise showed that, if Guatemala had acquired only external loans with IFIs, instead of placing Treasury bonds in private institutions, such as national and international private banks, it would have achieved annual savings of between 0.3% of GDP in 2021 (about USD260 million) and 0.7% of GDP in 2013 (about USD370 million).

The cumulative marginal savings over the period 2011-2021 that Guatemala would have achieved represent 6.2% of 2022 GDP (about USD 5.8 billion), about twice the current budget for public education and five times the budget for public health. These savings are very significant for a country with more than two million children and adolescents out of school, and with more than 50% of children under five suffering chronic malnutrition. In addition, this technical simulation shows that the average annual savings that Guatemala would have achieved are equivalent to 18.3% of its total annual public spending, 48.4% of its average annual public spending on health, and 35.9% of its average annual public spending on security and justice, key areas that directly impact sectors such as women and the struggle for gender equality.

Due to lack of information, ICEFI could not replicate this exercise for the Salvadoran case with the same technical rigor. Nevertheless, applying the assumption that the interest rates of the loans that El Salvador has contracted with the IFIs are like those of Guatemala, the results lead to similar conclusions to those of the Guatemalan case.

The study explored the level of influence or control private creditors have over governments, given the preference for public debt in private hands, despite its high financial cost. Once again, Salvadoran authorities refused to respond to a questionnaire sent by ICEFI. On the other hand, the Guatemalan authorities explained that the main criteria for choosing the type of public debt to contract is to minimize the financial cost while maximizing the availability of resources. This second criterion is very important, because it explains why Guatemalan authorities prefer to place bonds in private capital markets, domestic or international, even at higher interest rates. By placing bonds in private banks, there are no conditionalities, the disbursement of resources is faster, and the government has full discretion to define their allocation. ICEFI considers that this scheme dangerously increases the influence or control of private creditors over government decisions, and due to the extremely high level of discretion, it also increases the danger and risk of corruption, as decisions on contracting public debt may be biased in favor of private banks, in exchange for a bribe. The Guatemalan authorities also reported that they do not have a procedure for renegotiating public debt in private hands.

ICEFI makes several recommendations, especially to make public debt in private hands more transparent, with a particularly serious concern in the case of El Salvador. It recommends that organized civil society in both countries should deepen their knowledge of the governments' current creditors, considering that today the main holders of public debt are not the IFIs nor other international organizations, but rather private banks, both national and foreign.

[1] Avalilable on line at https://icefi.org/publicaciones/una-evaluacion-del-efecto-del-endeudamiento-publico 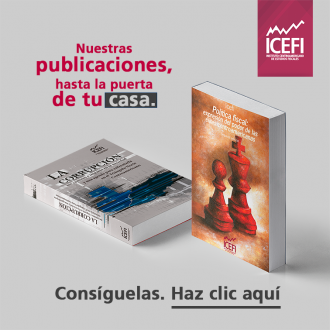